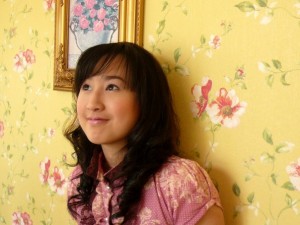 What type of writing do you do?

I mostly write in my journal — reflections, ramblings, details that I notice, conversations that I have or overhear. It’s the only kind of sustained writing that I can do outside of classes. I’d like to think that it helps me furnish material for more formal nonfiction or fiction pieces, but it’s also something that I really enjoy doing for myself. I’m beginning to write more fiction since I’ve taken Paula Sharp’s fiction class, but I can’t do any poetry. It’s completely foreign to me.

Un homme qui dort (A Man Asleep) by Georges Perec, which is about a young man who decides to become completely indifferent to the world. He wanders the streets of Paris, sleeps, dreams, watches other people, and describes the actions of himself and others around him in meticulous and beautifully-written detail. I was completely enamored by the lyrical, alliterative style, as well as the subject, perhaps because I identified with it a little. It’s hard not to feel similar things when you seem to spend such a large part of your day sitting in the metro.

What writers have influenced you?

I picked up Middlesex by Jeffrey Eugenides in eighth grade and completely fell in love with it. It was the first time I had encountered something so powerfully written, so tied to its characters and their interactions. I spent every spare moment I could reading it and I even stopped eating and socializing with people for a while. After that, my tastes changed completely and I started looking for books outside of the fantastical and the Dan Brown’s. My brother later gave me a copy of one of Anaïs Nin’s diaries, and she’s since become one of my favorite authors.

When I really think about it though, there are so many writers that have influenced me. It’s kind of hard for me to read something and not be influenced by it in, even in the tiniest way. In retrospect, E.B. White probably had a profound influence on my life before I even knew it. I don’t know how many stories I wrote about farms after reading Charlotte’s Web in first grade… I probably started writing because of that book.

Please tell us about your piece that won the Connelly Prize.

I submitted two pieces for the prize, both of which I wrote for my nonfiction courses with Lisa Cohen. The first is centered around a watch I bought one summer and how it was tied to a relationship I had with someone at the time. It’s kind of an experiment in style, and I think that it was an indirect way for me to talk about an experience that had a profound effect on me. I wrote it in freshman year, then abandoned it for a while, but now really like how complete it feels.

The second piece was my final project for my Advanced Nonfiction seminar: a profile of my father. It was extremely difficult to write, partly because I had to do most of my research during a Habitat for Humanity trip over spring break, thus spent a lot of time making international phone calls in the car at odd hours. What was most difficult though was that it touched on a lot of sensitive issues in my family — issues that that we’ve kind of buried in the past and still don’t talk about today. I interviewed members of my family, and of course, my father, and unearthed a lot of things I hadn’t known about him.There were a lot of revelations for me while writing the piece, and I still don’t know how I feel about it. When I first wrote it, I didn’t feel like I had done the subject enough justice, so asked Professor Cohen if I could change my topic. She gave me a firm ‘no’ and encouraged me to keep going. I’ve revised the piece a few times since then, but am still ambivalent. I actually just looked at the piece right now, and I can’t get myself to read past the first few pages. I guess it’s still too hard for me to detach myself from it.

Where is your favorite place to write?

I don’t think I have a favorite place to write as much as a way to write. I need to be able to write on a surface — there’s something about pressing my pen to the paper and seeing my own handwriting that helps my ideas flow better. I’ve been keeping a notebook of my travels, and although I don’t usually reread previous entries, it comforts me to see my previous writing. It feels like I’m continuing my thoughts, in a way.

Where are you studying abroad, and what has been most surprising about the experience?

I’m studying abroad in Paris. What’s probably been most surprising is experiencing the culture shock that I should have felt when I went to the U.S. for the first time. During orientation in Paris, I had never felt so maladjusted in my life. Though language played a part in how I felt, it was far from the main factor. Identity became a big issue, because I always had to say that I was a student studying in the U.S., but that I was Thai, not American. Yet at the same time, when I work as a language partner or a tutor, people expect me to represent the U.S., or either rebuff me for not actually being from the U.S. I’ve had someone reject me for a position just on the basis of not being American. Other people have just referred to me as an American student. I suppose it’s typical of study abroad experiences, but I continually find myself rethinking my identity here.

Apart from that, what’s also been interesting is discovering how filthy and strange Paris can be. The Champs-Élysées at three a.m. is a sad, depraved place. 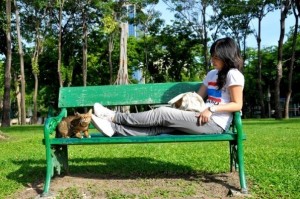 1 thought on “An interview with Yu Vongkiatkajorn ’13”