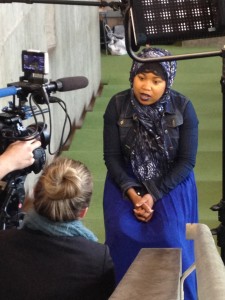 It was 9am on a Saturday and instead of being curled up in bed, I was running through the Usdan University Center, spilling coffee, scarfing down a croissant, and waving to other tired souls also awake at this hour. In my haste, something yanked me back and I embarrassingly had to unlatch my sweater from the door hinge and hurriedly tumble out onto the steps leading to the CFA. That morning I was not playing the role of the average college student, but putting on my hat as the Documentation Intern for Muslim Women’s Voices at Wesleyan.

Muslim Women’s Voices at Wesleyan is a year-long program at the Center for that Arts that is designed to expand awareness, knowledge, and understanding of Muslim cultures through the lens of performance. As the student intern with Muslim Women’s Voices (MWV), my job is to oversee the documentation of the performances, lectures, and residencies of the artists who have been chosen to be a part of the program. In the effort to create a series of mini-documentaries for each individual performer and a larger film that features all of the events included in the program, interviews are a prime resource for personal background information and greater context. In this particular morning’s rush, I was heading over to Crowell Concert Hall where the women who would perform later that night in Beckham Hall as part of the Planet Hip Hop Festival Concert were waiting to be directed towards their one-on-ones with the MWV program manager and journalists from the Islamic Monthly magazine.

Interviews can be awkward – do I look at the camera or at the interviewer? Is there something in my teeth? What happens if I can’t think of anything to say? These are the kinds of uncertainties that we as program leaders have to address to make sure our interviewees are comfortable and can focus on the questions that we ask. Usually, that means starting with easily answerable questions which can guide the interviewees to harder or more personal questions as the interview progresses.

Before we could begin, the camera needed to be set up in a favorable position and adjusted for changes in light and sound levels. Our videographer kindly asked me to sit in the interviewee chair so he could make the necessary arrangements and although I knew the camera was not rolling and questions about my childhood and my faith were not being aimed in my direction, I still felt a bit of unease. I was happy to hand the seat over to each performer when the time came and marveled at the confidence with which they carried themselves, something I had internally lacked while I was being put on the spot.

While the interviews were taking place, I was quietly seated off to the side listening to what each performer had to say – heard their stories, their triumphs and their failures, their histories – and I was inspired by their words. The ease with which these women were able to convey some of their most innate beliefs and intimate personal memories allowed me too see past their performance persona and into their lives. And although I knew that they were being taped for documentary purposes and I was specifically seeking out sound bytes that would be appropriate for our videos, I was also able to listen to the back-and-forth conversation between my program manager and the performer as if it were just that, a conversation.

I considered this idea – that how one presents oneself in a conversation could be drastically different from how one presents oneself knowing that whatever is said will be recorded – and realized that this must be how these women feel when they are performing. One woman was wearing neon trainers to her interview that morning then came out on stage later in the night in the most amazing zebra-print platform heels I have ever seen. Maybe we all do this, dichotomize our life in the form of multiple identities – our life in our trainers and our life in our stilettos.

Once the interviews were finished, the videographer prompted each performer to convey a series of emotions towards or away from the camera. “It feels really awkward but it comes out really beautiful” we all promised. And it did – in the final video, the emotion and sass and personality of these women seemed so effortlessly captured. Perhaps with a camera staring them in the face, the only thing that they could do was stare back, and in an infinite moment, something real was captured. It seemed amazing how an interaction with the vast darkness of a lens felt more invasive and scrutinizing than the gaze of hundreds of students at the final concert.

Our videographer calls these shots “moving portraits” and I would like to think that it is not the slow panning of the camera that he is referring to, but the reaction from an audience that views such an intimate and personal image. Somehow, the seconds of awkwardness and insecurity that inevitably arise as a consequence of this type of videography creates something only reserved for the world of fine art, a portrait.

As I considered the emotional intensity of the interviews and the off-camera personalities of these women I wondered, is identity a performance or a conversation? Maybe the performers, lecturers, and participants of Muslim Women’s Voices at Wesleyan can help us figure that out.

1 thought on “Behind the Scenes with Muslim Women’s Voices”