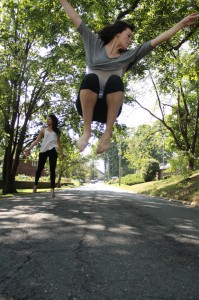 Kelsey Siegel’s piece, “Dynamical Systems” explored the intersection between dance and mathematics. Posts connected by strings were used as a visual prop and reference point throughout the dance. In the beginning of the dance, the posts were clustered in the center, and the dancers moved them apart to form a rectangle that framed the stage. The idea of space then was a crucial component of the dance; how the dancers seemed to be constrained by the space they were in, how they physically moved through space, and how they interacted with each other through space. The dancers also seemed to interact with the music, which was a combination of drums, violin, and spoken word, that fit the theme and mood of the dance as it progressed. The dancing itself was marked by stillness and pauses, which had the effect of making each individual dancer’s movement profound and with heightened effect. At times, the dancers would break out of the enclosed space confined by the posts and their connecting strings, and slam against the walls of the dance studio, as if impacted by momentum. The ending of the piece consisted of an explosion of energy in which the dancers moved the previously ordered posts into a jumbled chaos in the corner of the stage. The connecting posts, representing a system of equations, symbolized the constraints of logical thinking. This type of thinking, as the dance suggested, can have the effect of trapping one within a way of thinking, but true reality depends on experience. Thus, in order to experience the world, one must break out of the constraints of logic.

Lindsay Kosasa’s work, “Navigable Möbius,” explored the context of postwar Japan. The backdrop was a video projection, which began with footage of clear, moving water. However, food coloring and debris were slowly added, so that they swirled around and piled up, muddying the previously pure water. To this backdrop, the dancers were dressed in white and with hair in high buns, and moved with fluid, organic, and rounded movements. They often rolled on the floor and over each other, as if in a sort of fetal, protected innocence. In the end, the dancers moved slowly together, expressionless, and in a trance-like state to music that sounded angelic. This seemed to suggest that purity, innocence, and inner peace were maintained despite the figurative backdrop of a postwar state and the literal backdrop of raining debris. Water continued to course through the muddied debris, but it was not enough to clear up the destruction. Throughout the dance, there was a consistent theme of layers and texture. This texture was evident in the continuous accumulation of color and particles being added in the water footage, and in the movement of the dancers, as their story progressed in a linear fashion. This dance ultimately explored movement in a historical context with emphasis on the ideas of resilience and innocence.

Both works demonstrated the creativity and artistic talent of these seniors and how dance is a collaborative process between choreographer and dancers. The dance concert also highlighted how dance can form a powerful intersection with other academic subjects.