Jack Chelgren ’15 attends a poetry reading held at Espwesso, and reflects on their work. 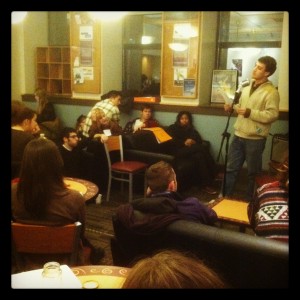 Last Thursday night, thirty or so people piled into Espwesso for a cozy and thoughtful program of student poetry.  Chairs and tables were cleared from the far corner of the room, where a shiny 1950s-style microphone now stood in their place, hooked up to a Fender guitar amp.  The mic teetered precariously on the end of its stand, and every time someone got up to read and adjusted it, the whole room watched in apprehension, waiting to see if it would fall.  (It did.)

The focus of the evening meandered from social and literary commentary to fantastical misadventures and questions of sexuality, love, and identity, a smorgasbord of topics that somehow seemed all in keeping with one another.  Robby Hardesty ’12, first on the roster, read a poem dedicated to his sister, set in a pitch-perfect tone of mock heroism (“To die!  O!  What?” he exclaimed to a tittering audience).  Alek Barkats ’12 rattled off a handful of quirky haikus before launching into a pair of ribald longer poems, one dedicated to his friend on his twenty-second birthday, the other a hilariously sardonic account of a man who has sex with dolphins.  Claire Dougherty ’13 wove a litany of strange, detached images into elegantly prosodic lines reminiscent of Sylvia Plath, while Betsy Sallee ’13, who teamed up with Dougherty to read a poem they cowrote, favored more violent, corporeal language.  Sallee lashed out graphically with lines like, “It is for you that I shave my prickle p*ssy and commit an ambien homicide.”  In another one of her poems, the speaker walks in on a girl she’d gone to elementary school with filming a porn sequence.

Peter Myers ’13 followed up in completely different vein, prefacing one of his poems: “This is a Wikipedia page: ‘List of fatal wolf attacks.’”  There is indeed such a page, and Myers seemed at first to be reading from it verbatim, bringing to mind the work of conceptual poets like Kenneth Goldsmith.  It soon became clear, however, that he was making at least some of it up—in recounting one supposed incident, he paraphrased the opening lines of Kafka’s “The Metamorphosis”; in another, he cited the victim as “John Fitzgerald Kennedy.”  Emily Brown ’12 read her set of poems twice, first somewhat timidly, then again with more force, delivering pithy, somatic reflections on sex and relationships.  Josh Krugman ’14, who followed her, read in a strange, theatrical voice like that of a bad Shakespeare actor, but the effect was amusing when coupled with the hallucinatory content of his work, lines like, “Just call me porcupine.”  He interrupted himself to inform us that he had just quoted Tennessee Williams, and took a deep, histrionic bow when he finished.  Leia Zidel ’12 read prose poems from her senior thesis, as well as one she had written just the day before, which seemed addressed or otherwise related to James Joyce.  Whereas Sallee was brutal and Brown almost tender with regards to sex, Zidel spoke of it lushly, in verdurous, organic terms: “I have shut my thighs, and still the terrible sap.”  Last in the lineup was Glenn Stowell ’13, whose work exuded a Whitman-esque regard for nature, evoking both a sense of motion and a kind of terrain or topography (which is fitting given that one of his poems was actually titled “Topography”).

What stood out most to me about the reading was just how well each of these poets was able to balance personal expression and earnestness with novelty and experimentation.  The poetic community at Wesleyan can often feel divided between the popular, galvanizing fare of WeSLAM and the rarified, hole-and-corner exploits of an unappreciated avant-garde.  But while such a polarity exists, Thursday night’s reading was a testament to the fact that between these two extremes lies a whole spectrum of work that doesn’t conform to either one.  A diversity of tastes doesn’t necessarily imply a division, but can in fact, as I saw on Thursday, be indicative of just the opposite: a community of individuals united by the common purpose of creating good work.

Emily Brown ’12, Claire Dougherty ’13, Josh Krugman ’13, and Glenn Stowell ’13 are this year’s Wesleyan Student Poets; their selected work has been published in a collection which is available around campus.  For information about upcoming events at Espwesso, like their page on Facebook.