Michael Darer ’15 reflects on his experiences at an Eclectic concert presented by R. Stevie Moore, on Saturday, September 22. 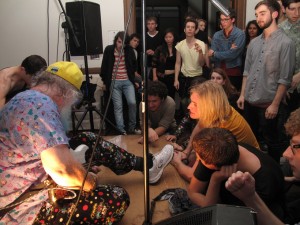 I couldn’t help but feel out of place, walking up the steps to Eclectic that Saturday night, the only one of my friends unversed in just who or what R. Stevie Moore, actually was. When I had prodded them around the table during dinner at Usdan, they had urged me to just wait, that they wouldn’t be able to explain. Occasionally, someone would throw out a generalized description, usually orbiting around some variation of “father of lo-fi music” but on the whole, my inquiries did me no good. We can’t explain him, they told me, sharing smiles almost conspiratorially between assurances that I would in fact enjoy myself.

In retrospect, they were right to announce their inability to make sense of what we would be seeing and hearing later that night. Any description they would have given would probably have seemed wholly incongruent with the end product and any accurate rendering of the man or his music would have ended with only deeper confusion on my part. In some ways, this is all very unfortunate, considering that I now find myself here in a similar position, self-tasked with painting a picture of an experience so weird and transcendent and disconcertingly beautiful that to actually present it accurately would entail a neutering and a draining of those in-the-moment energies that made the affair so, if you’ll pardon the seeming hyperbole, magical.

As one totally uneducated about R. Stevie Moore until very recently, I would feel awkward lecturing about the man’s background or oeuvre with any sort of expert’s confidence. In truth, all one really needs to know is that Moore is known both for how prolific he is (having released numerous albums through labels in addition to over 400 cassettes and CD-R albums independently) and how genre spanning his music tends to be. He’s dabbled in lo-fi and punk, power pop and spoken word, jazz, new wave, experimental rock. In many ways, it would appear that Moore’s music defies the concept of genre, that any successful attempts to pinpoint the trappings of a specific musical culture within his output are purely incidental.

When I got to Eclectic that Saturday night (late enough to miss the opener, early enough to still get soaked by rain on the trip over), the atmosphere into which I entered was absolutely otherworldly. The entire house, including those areas not in use, was permeated by an oddly charged calm, like a coiled spring was nestled beneath each and every molecule of air. Weaving throughout the space were trills of guitar, which seemed to move between the audience members. On the stage stood the man himself, clad in pajamas and looking like Santa Claus after a particularly rough weekend. Oddly enough, the first thing that came to my mind was Ethan Hawke’s description of Walt Whitman in ‘Dead Poets Society’: “a sweaty toothed madman with a stare that pounds my brain”.

On either side of Moore were two other musicians, whose clothes would be incrementally shed throughout the remainder of the performance. The trio seemed weirdly distant from one another and somewhat detached from the world beyond their small stage.

The music that they made over the next few hours was some of the strangest and most wonderful that I’ve heard in a long time, ricocheting back and forth between ethereal and prayerful strands of melody that hung out in the air like newborn birds, vulnerable, petite, in danger of being swallowed up by the stirring vigor of the sweaty crowd and raging forests of sonic bedlam, where individual notes dissolved in a hungry aural clamor which tore around the room in bouncing, clawing strides.

Every so often Moore would interrupt himself to say something, most of which was indecipherable. At one point he seemed to complain about the quality of the house’s PA system (confirmed by the Wesleying blog article on the event) before praising the crowd. While to the musicians these may have seemed like digressions, for me, they were no different than any other portion of the performance, bits of coarse sonic expression spit out for the audience to absorb into our own mass of noise. Every bit of sound that left that plinth on which the band stood seemed so indisputably organic, so fundamental and essential to myself and every other person standing near me, that even when I had no idea what was being sang, said or done (which was often, considering the bustle), I felt like I had known it would happen before it did, as though it were just some magnificently externalized somatic process, splayed out in exquisitely tinted tones for my befuddled enjoyment.

And Moore must have felt something like this as well, for it was not long before any trappings of a standard show were abolished. R. Stevie at one point found himself wandering over to play the Eclectic piano and, right before the show was broken up by Public Safety officers, stumbled out into the crowd for no apparent reason.

Leaving with the rest of the crowd, I felt as though I was taking a bit of the performance with me back to my dorm, while, at the same time, I was struck by the realization that what I had experience could only ever exist in a place and moment that had since dissolved. Certainly, the most meaningful things, especially those rooted in art embody similar qualities: an ephemeral truth that somehow strives to survive beyond the boundaries of its prescribed universe. For as long as I can, I intend to nurse this experience as best I can, even though I know it will eventually fade away. In life and in music, I can’t think of a better thing to feel.