Rebecca Seidel ’15 reflects on her visit to “work divided by time,” a sound installation by Assistant Professor of Music Paula Matthusen, on display in Van Vleck Observatory through Sunday, May 13, 2012. 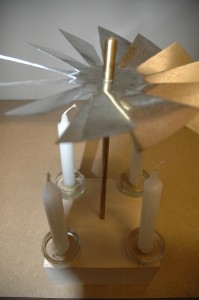 Energy. Power. Work. Time. We use these words rather casually in everyday conversation.  But when we delve deeper into these theoretically simple terms, we begin to realize the depth of their meaning.  The concepts of work and time carry an endless variety of historical and cultural contexts; they mark a place where science and culture merge.

work divided by time, Assistant Professor of Music Paula Matthusen’s new sound installation at the Van Vleck Observatory, reflects and renews these ideas.  The installation quite literally echoes a historical conception of time in a way that is simple yet evocative.

Dr. Matthusen’s work on this piece was inspired by a visit to the small town of Spillville, Iowa, where Frank and Joseph Bily spent all their lives constructing huge mechanical clocks.  The clocks, now on display at the Bily Clocks Museum in Spillville, feature intricate visual designs and moving figurines – as well as the captivating sounds of chimes and music boxes.  work divided by time takes sonic recordings of the Westminster Clock, one of the Bily Brothers’ first clocks, and manifests them using simple electric circuits.

A visit to the installation will bring you to a tiny room, surrounded by faint tones and snippets of static, bathed in the meditative heat and glow of candles.  The candles sit atop small handmade wooden boxes embellished with rosette patterns, from which the tones of the clock emerge.  Above each box and set of candles is a rotating propeller, powered by the heat of the candles.  If you lean in close, you’ll see that each setup forms its own little circuit – its own microcosm of energy.

“As the propellers turn on the modules, certain blades dip lower than others, at times intersecting with a wire that closes a circuit, allowing an audible tone to emerge, as well as a grit of noise as the connection is made and then re-broken,” Dr. Matthusen explained.  “Small rhythms emerge as the blades move at different rates, and gradually slow down and/or stop alltogether.”

Certain propellers do indeed slow to a halt occasionally, though a light tap will get them moving again.  You never know what patterns of sound will result – a factor which adds an intriguing layer of unpredictability to a space that is visually balanced and uniform.  The simplicity of the installation’s design makes all the small nuances of sound spring to life.

The mechanisms of work divided by time were constructed mostly by hand, recalling the innovation and technical skill with which the Bily Brothers fashioned their clocks in the early 20th century.   The brothers never once strayed further than 13 miles from their hometown – yet their clocks display an incredible level of worldliness and a boundless spirit for adventure.  The clocks are huge and majestic, some reaching over nine feet in height.  The setup of work divided by time is nowhere near as grandiose – quite to the contrary, its beauty arises from its conceptual simplicity and the subtlety of the sounds it produces.  The installation evokes the time and energy put into Frank and Joseph’s creations, while also transforming their legacy into something entirely new.

In a speech at the installation’s opening reception, Dr. Matthusen talked about her experience at the Bily Clocks Museum, and how it shaped her ideas for work divided by time:

“When I was first there, I heard the audience gasp as the music box gears engaged, and figurines began to rotate through the intricate mechanisms of the clocks.  I heard expressions – and certainly thought them myself – ‘I can’t believe the amount of work that went into that’ or ‘I can’t imagine the amount of time it would take to build that.’  Part of what is intriguing about these reactions are the very general concepts we’re accustomed to throwing around – ‘work’ and ‘time’ (perhaps in having too much of the former and not enough of the latter) – and in the work of the Bily Brothers, we encounter a world that has a radically different relationship to both.”

The installation stands alone as an immersive soundscape and physical space, but having this sense of its background makes the experience more meaningful. Because of the room’s small size, only a few people can step inside at a time.  This ends up enhancing the experience, allowing visitors to really settle into the space and the sounds – as well as the occasional lapse of silence.

work divided by time was commissioned by the Center for the Arts as a part of the ongoing project Feet to the Fire: Fueling the Future.  As Dr. Matthusen pointed out, this installation has “the unique status of being the first Feet to the Fire commission to use actual fire.”  It’s also the first sound installation of its kind to ever be set up in the Van Vleck Observatory.

But work divided by time is memorable beyond these standout details.  It infuses meaning into simple circuitry, in a way that is quietly powerful (no pun intended).

The installation is open every afternoon through Sunday, May 13, 2012.  You can see the exact hours here.