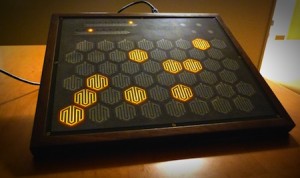 One face-stingingly cold night not long ago, I extricated myself, a few minutes behind schedule, from the piles of homework blanketing my bed and hurried across campus to Russell House.  I arrived slightly late, and as I sped through the main gate and up the walkway was unnerved to see that the parking lot was practically empty.  I began to worry I’d come to the wrong place.

Fortunately, I hadn’t—climbing the steps to the front door, I spotted a poster taped hastily to one of the panels: “.twiddlebuf / music for violin and electronics.”  My tardiness was similarly not an issue; I slipped inside several minutes after the show was supposed to start to find the audience standing around in the reception area, munching on cheddar and apple slices.

This was the second concert in a series put on by Wesleyan’s student-run Experimental Music Group, the first of which I went to back in October.  That show featured acclaimed Berlin improvisers Madga Mayas and Tony Buck performing under the name SPILL, and it was incredible.  Using highly inventive extended techniques on their instruments—which are piano and percussion, respectively—Mayas and Buck created captivating and original music, great sprawling pieces at once violent and deeply spiritual.  It was a stunning night.

Having enjoyed SPILL so thoroughly, I went to .twiddlebuf with rather high expectations, and happily, I was not disappointed.  The two concerts were worlds apart from each other both in terms of sound and overall feeling, but they also shared a number of key characteristics that made each one enjoyable in its own distinct way.  .twiddlebuf, like SPILL, is a duo, comprised of electronic artist Sam Pluta and violinist Jim Altieri, and in both groups’ performances this configuration lent an intimate, conversational tone to the proceedings that facilitated extensive communication between the musicians and the audience.  The largely improvisational nature of the music was also critical to its success.  This helped to free up the musical conversation, creating an open, receptive environment for the musicians to share and interact with each other while we, the listeners, looked on, reflecting and just trying to keep up.

The greatest parallel between the two shows, however, was their manipulation of conventional instruments to explore unfamiliar sonic voices.  Mayas and Buck did this acoustically, placing objects and wires in and around their instruments and playing them in unusual ways, by scratching the piano’s strings, for instance, or rubbing large metal gears against the head of the snare drum.  .twiddlebuf took an electrical approach, using computer software and a fancy touch controller called a Manta to harness and distort the sound of Altieri’s violin.  Working effortlessly in tandem, the two of them blew apart the instrument’s traditional sound palette, evoking a myriad of textures and images from a passing train to a shakuhachi flute to the splotchy, moist work of modern electronic producer Balam Acab.  John Cage’s Rozart Mix (1965) was also fresh on my mind from the Alvin Lucier Celebration, and these choppy exchanges recalled that piece vividly for me as well.

Unlike the SPILL concert, which put me into something of a meditative reverie, I left .twiddlebuf feeling energized and invigorated.  I wasn’t very affected in an emotional sense, but in retrospect I don’t think that was the point.  It’s not that Pluta and Altieri’s music is frivolous, or that they don’t their craft seriously as other artists, say Mayas and Buck, do; it’s just different.  As their strange and playful name implies, .twiddlebuf is about experimentation its own sake, and also, arguably, for sound’s sake.  And that’s okay.  We need art with meaning, art that probes our lives and emotions and shows us what we cannot see, but we also need art that knows itself, that explores its own limits and potential and in doing so helps keep progress and innovation alive.

In light of these remarkable first two shows, I look forward to whatever the Experimental Music Group offers next.  My only criticism so far is that they’re too quiet about themselves; aside from day-of posts on Wesleying and a smattering of last-minute signs around campus, there was precious little publicity for either of the amazing and totally FREE little gems they’ve put on.  (Hence the empty parking lot at Russell House.)  But fear not—I recently discovered their group Facebook page, which you can like to hear about upcoming concerts in the series.  Keep an ear out.

To learn more about any of these artists, visit their websites: