This weekend Wesleyan’s Theater Department presents “The Great God Brown” by Eugene O’Neill, directed by Associate Professor Yuriy Kordonskiy. The play follows the life and conflicts of two men, Dion Anthony and Billy Brown, who are friends and rivals throughout their lives. Originally written for four actors, Mr. Kordonskiy has cast ten actors to portray the complexity of the relationships. Earlier this week, Sarah Wolfe ’12 sat down with Nicholas Orvis ’13, who is the Stage Manager for the show, to talk about the experience so far and what to expect this weekend. 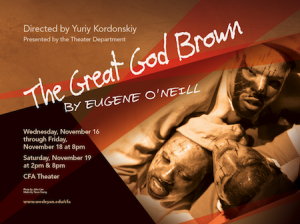 Q: What do you think about Eugene O’Neill’s original play?

I think it’s a brilliant show. It’s a good chance for people to come see some of Eugene O’Neill’s edgier work. I actually have not liked most of the Eugene O’Neill I’ve read because a lot of it, especially Long Day’s Journey Into Night, I found dull and dragging. This one is a fast two and half hours (and that was after we cut 40% of the text). But it’s really a show where he took a lot of risks and created a really exciting, controversial, not simple piece of theater. It’s definitely not classroom Eugene O’Neill.

Q: Can you talk about how you’re doing this four character play with a cast of ten?

A lot of what the play deals with, is the idea is that we have multiple personas that we put forth. The way you act with your family is different than the way you act with your friends, and so on and so forth. O’Neill originally did this with the use of masks, which we are also using. But one thing we talked about in developing the play is that we think the idea that we have only two of these personas, our public one and our private one, is kind of an old fashioned, limited idea. So we decided to have multiple actors playing the same part. We have three men who are playing Dion. We have two women who are playing Margaret [the love interest], two women who are playing the fourth character, Cybel, who is a prostitute/mother figure to both of the men. And Billy Brown is played by one performer in the first half of the show and in the second half – I won’t spoil anything substantial by saying he begins to deteriorate and as he deteriorates we add more and more performers, so that by the end he is actually being played by five people simultaneously.

Q: Talk about the use of masks, and how that’s been in the rehearsal process with people who have used masks very little or not at all?

Q: Talk about working with Professor Yuriy Kordonskiy as a director.

Yuriy’s phenomenal. Watching him work with a cast is very rewarding. He has the ability to see choices in the text that make perfect sense but aren’t necessarily highlighted, but as soon as he suggests them, we all go “Ohh!” So that’s very exciting.

It’s been a little hectic too. He is a very well known director in Romania and there was actually a week in our rehearsal process where he was in Romania, opening a play that he had directed there over the summer. It was a good experience for all of us in the production, because it pushed us to work ourselves and to develop the material ourselves. At the same time it was a little bit terrifying because we thought, “What if he comes back and everything we’ve done is wrong? And then we’ve just lost the whole week of rehearsals!”

Q: What’s your favorite part of the rehearsal process been, do you think?

There’s always a point where it starts to come together in a way that it hasn’t before. When we cast the show, we didn’t put any of them in roles. So we spent a couple weeks working as a group with the text. We’d be switching roles around, we’d be doing multiple scenes at the same time with different size groups of people. Several weeks into the rehearsal process, Yuriy solidified the casting. That was the point where things really kicked into high gear.

Q: Has there been a particularly challenging part of the process, either for you or for the cast?

It is hard, because we have no one [in the cast] who has intensively worked with mask before, and mask is a very demanding aesthetic style. It’s very physically demanding, and there are also a lot of technical challenges. Making yourself heard is much harder when you’re wearing a full-face mask. So that’s been a challenge but they’ve risen to it beautifully.

Come see “The Great God Brown”, this weekend in the CFA Theater. Tickets are on sale now and selling fast. This exciting show is not one you will want to miss.