How do we balance the many roles we play, owning our identities and wanting to belong? How do we know what we think we know, see what we don’t, view ourselves and each other and engage in the spaces between? This Friday, April 17 and Saturday, April 18 at 8 pm in World Music Hall, Lebanese American writer, performer and teaching artist Leila Buck ’99 will explore these questions in “In/Between: Pieces in Progress,” a work-in-progress sharing of a collaborative theatrical work.

As part of Muslim Women’s Voices at Wesleyan, the piece reflects Buck’s semester-long engagement and collaboration with a tight-knit group of students. Throughout the spring semester, Buck met with two groups: one group of students who identify as being of Muslim heritage or culture in some way and another group of student allies interested in the topic of Muslim women. Meeting once or twice a week, Buck and the students created an informal space to talk about issues related to Muslim women, such as Charlie Hebdo and “Je Suis Charlie,” the recent shootings in Chapel Hill, North Carolina, representations of Muslims in mainstream media, feminist politics and personal experiences. Based on these conversations and interactions, Buck began crafting theatrical scenes, storytelling and playful improvisations that will be at the heart of the work-in-progress showing on April 17 and 18.

“It’s been a really wonderful opportunity to have a group of students who are so interested and engaged and coming from all these different backgrounds academically and personally and culturally, give me their thoughts and reflections on things that I’m investigating,” Buck said. “To be able to have a group where I could talk through my ideas and trust them to understand what it is I am trying to create and hear their responses and get their feedback, has just been enormously helpful in and has shaped the piece.”

The students who were involved joined the project for a variety of reasons. For Israa Saber, a sophomore majoring in Government with a Middle Eastern Studies certificate, contributing her own experience as a Muslim woman to the project was important to her.

“Finding out that this would be happening here and I could help in it and give my perspective, which isn’t really asked for very often, was something that I really wanted to do to make sure Muslim women’s voices are heard,” Saber said.

For Casey Smith, a sophomore majoring in CSS with certificates in Middle Eastern Studies and International Relations, the project was a continuation of her work with Leila the previous semester, when she audited Leila’s class, Beyond “the Veil”: Representations and Realities of Muslim Women in the U.S.. Smith had spent the summer before in Oman on a scholarship from the State Department to study Arabic and planned to engage with her experiences in Leila’s fall semester class and spring semester project. Once Smith began attending the meetings, her relationship to the project shifted as she found many connections to her academic studies.

“First I thought I was going to contribute like, ‘Oh, I’ve lived in the Middle East for a bit and met a lot of Muslim women’ and that was my first way in,” said Smith. “But for CSS and other classes I read a lot of political and social theory and the more academic perspective of things we’ve been talking about. I found myself being like ‘Oh, I’m going to email Leila my Middle Eastern Studies paper’ or ‘Oh, this is a paper I wrote last year in my Islam class about the historical context for representations of Muslim in the media.’ So I think my academic background has fit really nicely into this project and I’ve been able to contribute a lot of theory.”

Participating in Leila’s artistic process has also influenced the students’ perspectives on art and art production. For Smith, being involved in the project allowed her to reevaluate the connections between art, social change and academics.

“I had never really experienced using art as a mode of social commentary or advocating for awareness of social justice issues before this, so I think that’s been cool to interact with an issue I’m interested in academically in a way that is connected to the arts,” said Smith. “I’m a dancer, so I’ve done a lot of arts stuff, but I’ve never really combined my academic interests with arts.”

The project also allowed students to form bonds with each other and with Leila. The connections Saber formed through this project has impacted her relationship to Wesleyan.

“My town that I lived in and the communities I’ve always been a part of have been majority Muslim, specifically Egyptian Muslims, so coming to Wesleyan and finding no one, especially last year when I was the only person wearing a hijab, it was just very alienating. There was no one I could really connect to. I had thought of transferring out to a place with more Muslims that I could connect to especially because there was very limited activities with the Muslim Student Association and there wasn’t an Arab student group here,” Saber said. “But now, I guess this project was what convinced me to stay, honestly. I was like finally, I’ll have someone to connect to or someone who looks like me, grew up like me. I’m so happy this project happened. I really needed it.”

Smith developed a close relationship to Leila through being in her class last semester and engaging with this project.

“She’s the kind of person who’s very open and I am able to contact her about things that aren’t about this project,” Smith said, pointing to how she once made turkey chili with Leila at her house or how she called Leila after the Chapel Hill shootings. “She’s just really good at being there for her students as humans with feelings and not just as people to teach and then leave at the door,” Smith said.

The project has also influenced Saber and Smith’s reflections on their futures. Saber found inspiration in Leila’s work to work with Muslim communities.

“Meeting with Leila was kind of a ‘you can do what you love and still do it for the people that you identify with,” said Saber. “I’ve been feeling a lot of ‘what do I want to do with my life?’ because I also want to work with the Muslim- Middle Eastern community. So it was inspirational, sort of like, ‘you know what, I’ll just do it.’” Saber is interested in journalism and international law, particularly human rights law.

The project provided Smith, who is interested in working to address women’s rights in the Middle East, with new perspectives on social justice work. “Leila’s work has made me think a lot about how feminism, that’s kind of a Western movement, can overlap with cultures that aren’t Western and how can we find a way to reconcile those two things. It’s made me want to work with Muslim women and at organizations that aren’t just a bunch of Western people deciding what’s wrong with the rest of the world,” Smith said.

Looking towards this weekend’s performance, Buck reflected on the importance of the collaborative process. “Whatever happens on Friday or Saturday, this group and the process we’ve gone through together has been the greatest journey of this project for me,” Buck said. “That and the class I taught [in the fall] has been so profoundly meaningful and inspiring and has been by far the most important thing I feel I’ve done during my residence at Wesleyan. I hope very much that we are able to share our goals and that journey and invite the audience into it.”

Being on stage at Wesleyan this weekend will also have sentimental value for Buck, a Wes alumus.

“It’s been really meaningful to come back to the campus where I started to write and where I was formed as an artist,” said Buck. “I feel that Wesleyan students and professors that I’ve engaged with have such an ability to see the complexity and the gray area and the nuance of things and to look for it when it’s not being shared. They also are so open to self-reflection and recognizing the importance of putting yourself and your background in context. That has been so valuable to work with,” said Buck. 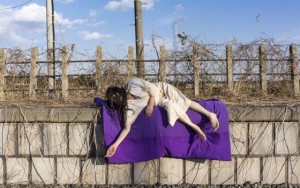 Eiko Otake and Bill Johnston’s A Body in Fukushima overwhelms. Spread through three galleries, the sheer number of photographs and videos presented dominate the senses and in each space it takes a moment to get your bearings. When finally you are able to refocus and notice the prints individually, from gallery to gallery they continue to destabilize and confront the viewer with their fragility.

I sat in on an open workshop of Eiko’s course, Delicious Movement, where she challenged us to move uselessly, using our body as a landscape and the floor as a tool. When a student expressed frustration at her struggle to move this way, confused at the difficulty of trying to move with ease, intuitively, Eiko discussed the importance of struggle and difficulty in her work. Traveling to Fukushima, placing herself in danger of radiation poisoning, instead of fleeing the pain of the disaster, Eiko places herself at the center of it in an intimate embrace. And the photographs in the exhibition are not easy to look at – the bright swaths of blue sky in almost every print serve as a reminder of the life that used to inhabit these spaces. Eiko’s presence in the immense scenes of destruction highlights the lack; her body becomes a house of remembrance that holds the individuals still exiled from the contaminated communities.

In her workshop, Eiko returned again and again to the metaphor of regeneration to inspire our movements: “There are flowers growing all over your body – even if you crush one here [grabbing her chest], one may grow here [her back] or here [her leg] or here [her arm]!” The images in A Body in Fukushima that do show signs of life capture boundaries – edges of forests at abandoned subway stations, for example. Creeping in on the desolation, these shreds of verdant landscape cast a primordial aura over the post-nuclear, post-apocalyptic realm of Eiko’s Fukushima. The photographs evoke the tension of humankind’s existence on earth – after we have been undone by our own creations, what is left? Plants reclaim the space vacated temporarily by humans, negotiating a landscape traumatized by the push and pull between natural resources and those who use them.

Although the portions of the exhibition in the Davison Art Center and CFA South Gallery are now closed, Eiko and Bill’s video installations remain on display in the Center for East Asian Studies through May 24. And if you happen to be around during Reunion and Commencement, the South Gallery installation will be up for an encore presentation from May 21-24.