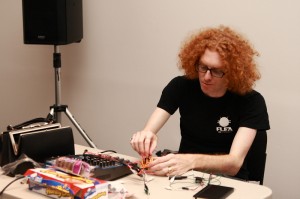 Max Tfirn is a tall and spindly grad student with Led Zeppelin hair and a casual, unassuming air.  Out of context, one would more likely take him for the drummer of a heavy metal band than the composer of erudite electronic music.  He was lurking in the audience when I arrived at Crowell Concert Hall last Friday night for his Masters Recital, “Pieces From Nature,” but he made his way to the front of the hall as the house lights dimmed.  Squinting up at us, he asked that we all please turn off our cell phones—not just put them on silent, but turn them off—because the technology he was working with onstage was very sensitive, so much so, in fact, that any cell phone activity could actually cause it to catch fire.  “And we wouldn’t want any pyrotechnics up here,” he concluded.  It was difficult to tell if he was joking—while he seemed completely earnest, the idea of a mixer spontaneously combusting on account of a stray cell phone call seemed more than a little far-fetched.  It wasn’t too much to ask, though, so I joined the small handful of people around me in turning my phone off, completely and utterly off.

Tfirn specializes in music based on L-systems, a kind of formal grammar used for modeling plant growth and fractals.  First proposed by a Hungarian biologist named Aristid Lindenmayer in 1968, L-systems take simple terms called axioms and expand them into long strings of symbols, which can then be graphed as geometric structures. Tfirn then goes a step further, using these shapes and sequences as the structural basis for his compositions.

The six pieces he performed on Friday night were at once varied and similar, amorphous and constant.  They were works of geologic proportions, strata of highly textured sound shifting and evolving like the grinding of tectonic plates.  The opening piece, 32°(F+F)F[+F][-F]F[-F[-F][+F]F], began as the sparse interplay of a handful of tones before sweeping into an enormous hurricane of noise, chaotic and fluctuating, evoking variously an air raid siren, an oncoming train, electric guitar feedback, and the roar of the ocean.  In the listless and agitated Sounds of Auditory Hallucination, Tfirn let loose a high-pitched drone that bored through my skull and swirled around inside it, underpinned by an array of splotches, shrieks, and twangs reminiscent of Morton Subotnick’s Silver Apples of the Moon (1967).  He was joined on vocals by fellow grad student Liz Albee, whose throaty hums and ululations he distilled into a stream of metallic clangs and whistles.  The most conventional display of the evening was A Meeting of Florets, a piece for prepared piano performed by Seung-Hye Kim and Tfirn with a sprightly atonality à la Anton Webern and a spiraling repetitiveness à la Frederic Rzewski’s Les Moutons de Panurge (1969).  Through the insistent reiteration of the seven short motifs that make up the piece, however, Tfirn elicited the same balance of stasis and constant upheaval that pervaded the entire concert, maintaining a prevailingly mercurial air even in this seemingly more traditional composition.  The evening concluded with Florets, a piece for laptop ensemble in which each performer works in real time to match the frequencies mapped visually in an image.  It was perhaps the most intangible of them all, a fog of entangled, slowly rising voices suggesting a vague yet mounting apprehension.

Tfirn’s work is fundamentally interdisciplinary, drawing equally on the linguistic, the visual, and the musical.  A string of symbols becomes the outline of a tree and then the form of a song, each one accentuating intrinsic but otherwise imperceptible qualities in the others.  Ultimately, Tfirn demonstrates the extent to which our experience and understanding of the world is shaped by the lenses through which we perceive it.

For more information about Max Tfirn, or to listen to his music, check out his website or SoundCloud.