Jack Chelgren ’15 considers the performances of “Alvin Lucier: A Celebration.” “Alvin Lucier (and His Artist Friends)” is on display in the Ezra and Cecile Zilkha Gallery through December 11. The gallery is open Tuesday through Sunday, noon to 4pm; noon to 8pm on Fridays. Admission is free. 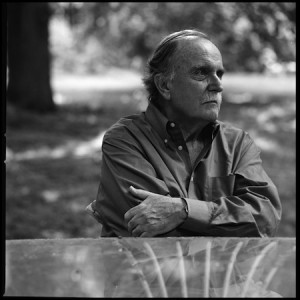 Sitting in Crowell Concert Hall on November 5, listening to the Wesleyan Orchestra performing Alvin Lucier’s Exploration of the House (2005), I found myself wracking my brain for ways to describe what I was hearing.  A number of adjectives came to mind—“cavernous,” “meditative,” even “primordial”—as well as other, more evolved images: The sound of singing wine glasses, a flickering of light on the surface of water.  Yet while these depictions evoked different aspects of the music, none of them truly struck its essence, which was a little ironic, given that Lucier’s pieces draw their strange, otherworldly qualities from everyday spaces and phenomena.  Like his most famous work,  I Am Sitting in a Room (1969), Exploration of the House is created by recording and rerecording sound until nothing but feedback and the resonant frequencies of the space remain.  But unlike Room, which takes the composer’s own speech as its medium, the latter directs an orchestra to perform passages from Beethoven’s Consecration of the House (1822), which are then put through the same distorting process, transforming stately Sturm und Drang into glowing sonic soup.  And while the traditionalist might cringe at the dismantling of a respected masterwork into uncontrolled, alien noise, sitting in Crowell with those waves of turbulent sound shimmering all around me, I could not help wondering if I had ever heard anything like it.  I was astounded by the simple clarity of Lucier’s artistic vision: he had taken a classic, a fixture of Western art music, and made it utterly his own, fashioning the original and organic out of the familiar.  This, indeed, is why Lucier’s music is so challenging to describe, and why, on a certain level, it seems so natural: he shows us what we already know, but in a different light.

In all, the Alvin Lucier Celebration was a spectacular tribute to the life and work of a man who for more than half a century has done as much as anyone in shaping the progress of experimental music.  It was also a testament to the ongoing vitality of this tradition, both in the world at large and at Wesleyan in particular.  “It’s impossible to overstate his influence,” said Dr. Paula Matthusen, when I spoke with her several weeks ago about the Celebration and its significance to the arts at Wesleyan.  Matthusen, who this year took over for Lucier teaching the famous Introduction to Experimental Music, cites Lucier as a major influence on her own work.  “It’s about these very simple processes revealing something magical,”  she told me, reflecting on his music.  “There’s something very poetic about it.”  In 2006 and again in 2008, Matthusen put on a sound installation called Filling Vessels inspired by Lucier’s 1997 piece Empty Vessels, which, like much of his oeuvre, is based on the exploration of spatial acoustics.  Subsequently, just a few days after my conversation with Dr. Matthusen, I had the opportunity to speak with Andrea Miller-Keller, guest curator of the exhibition Alvin Lucier (and His Artist Friends) in the Zilkha Gallery (on display through December 11), who called the Celebration a “major event in contemporary music at Wesleyan.”  Both she and Dr. Matthusen noted that while the Celebration was first and foremost a retrospective on Lucier’s life and achievements, it was also promising as a springboard for the ideas of younger musicians, students and alumni both.  “I’m hoping it’ll be a big shot in the arm, like an intensive learning experience [for everyone involved],” Miller-Keller enthused.  Ultimately, it wound up being just that.  A considerable amount of new music dedicated to Lucier was débuted throughout the weekend, ranging from tributes by genre luminaries Robert Ashley, Gordon Mumma, Christian Wolff, Neely Bruce, and Pauline Oliveros (all of whom were present for the performances) to a flash mob rendition of Lucier’s 1968 piece Chambers by the students of this year’s MUSC 109.

The Celebration’s greatest moments, naturally, came during its four main concerts.  Each of these abounded with fantastic performances, but a handful stood out as particularly memorable.  The gloriously simple Silver Streetcar for the Orchestra (1988), which opened the Solos concert, was such a piece.  Scored for solo amplified triangle, it was performed by Brian Johnson, for whom it was originally written—and it was spellbinding.  Johnson’s incessant, carefully-amplified beating grew into a thick collage of sound, filling the hall with layer after layer of overtones running from the unpitched, metallic low end to the delicate melody of resonant tones that emerged as the music progressed.  Another highlight was the opener of the Ensembles concert, Music for Gamelan Instruments, Microphones, Amplifiers and Loudspeakers (1994).  A number of works performed last weekend were written to explore what Lucier called in the program notes his “fascination with the idea that pitch can create rhythm,” which occurs through the interaction of sound waves tuned at close intervals.  In these pieces, Lucier reinvents harmonic dissonance as a metrical device, harnessing it to open up previously ignored realms of sonic possibility.  Performed by the Wesleyan Gamelan Ensemble, this was the most compelling of any of these explorations, a juxtaposition of the feedback created by holding bonang gongs over microphones with the normal intonations of gendér metallophones.  “Since it is virtually impossible that a strand of feedback will match exactly on any fixed-pitch instrument,” Lucier explains in the program, “audible beats [will] occur.”  The combination of the impressively regulated feedback and the soft chords emanating from the gendérs gave rise to a splendidly pulsating soundscape, hollow yet solid, lustrous yet nocturnal.  Finally, while the entire third concert, a recreation of Lucier’s first performance at Wesleyan, was superb—at numerous points during the show, people literally got out of their seats and walked around to get a better look at the performance—I was most affected by John David Fullerman, John Pemberton, and Douglas Simon’s collaborative tape work Cariddwen (1968).  Like the forgotten evil twin of Steve Reich’s classic Come Out (1966), Cariddwen takes a short, sibilant passage from James Joyce’s Finnegans Wake and chops it up, stretching, jumbling, and overlaying the words into a mesmerizing cascade of speech and noise.

In addition to Dr. Matthusen and Ms. Miller-Keller, I had the privilege of doing a short interview with Lucier himself a week or so before the Celebration began.  I asked him some questions about his music, the event, and the arts at Wesleyan, and then turned to the perennial query that faces every creator of experimental art: How should we appreciate your work?  Lucier answered unhesitatingly.  “There’s something I used to tell my MUSC 109 [Intro to Experimental Music] class,” he told me.  “‘I’m not really interested in your opinions.  I’m interested in your perceptions.’”  He laughed, musing that that sounded a little harsher than he meant it.  “Just listen carefully,” he revised.  But appreciation did not seem to be an issue for the concertgoers I encountered last weekend; quite contrarily, the entire event was characterized by a tone of enormous regard for both the man and his music.  Exploration of the House was the final piece in the Ensembles concert on Saturday night, and after it had finished, Lucier made his way from the audience up to the stage.  As he mounted the steps, shook hands with the conductor and concertmaster, and waved to the crowd, the entire hall got to its feet, ending the night movingly with cheers and a standing ovation.  It was a fitting climax for the evening, and for the Celebration as a whole, for three days dedicated to honoring a man whose influence has changed music at Wesleyan forever and will continue to do so for many years to come.